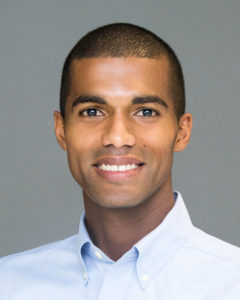 Ruben Sança is a USATF Level 1 Certified Coach and Olympian from Cabo Verde who competed at the 2012 London Olympic Games in the 5,000 meters. Ruben began his running career at the O’Bryant High School in Boston and graduated with personal bests of 4:32 in the mile and 10:09 in the two mile. He then attended UMass Lowell, where he became a 4-time All American and 3-time New England champion in distance running. At UMass Lowell, he lowered his personal bests to 4:07 in the mile and 8:41 equivalent for the 2 miles. Ruben attributes his running success to his relentless passion for the sport of running and the changes in coaching and training environments, which provided him with more opportunities and greater challenges.

Since the 2012 London Olympics, Ruben has continued to compete both regionally and internationally. After missing the 2016 Rio Olympic Games by just 5-seconds in the marathon, Ruben has set his sights high on qualifying for the 2020 Tokyo Olympic Games. Ruben has enjoyed much success on the local scene as a member of Whirlaway Racing Team. In 2017 and 2018 Ruben was crowned USATF New England Grand Prix Road Racing Champion. In addition to the 2012 London Olympic Games, internationally, Ruben has represented Cabo Verde at several other distinguished international events, including the Lusophone Games in India and Portugal, the Francophony Games in France, the Ibero-American Games in Brazil and the I.A.A.F. World Championships in South Korea.

While not plugging in his 125-miles per week in training, Ruben balances a full time job as an associate director for Student Affairs Financial Administration at his alma mater UMass Lowell along with executive duties as the founder and owner of Lowell Running, LLC, a full service professional coaching firm specializing in individual and group training for runners. Ruben gives back to the community by engaging in student-athlete driven initiatives. Most recently, in 2018 Ruben founded The Sança Foundation, Inc, a non-profit youth organization with a focus on integrating sports, academics and life skills as driving forces to creating a positive and sustainable impact in Cabo Verde. Ruben has been inducted into the UMass Lowell Athletic Hall of Fame as well as the University Staff Wall of Honors.

Through his exceptional leadership on and off the field, Ruben has been recognized by many affiliations for his accomplishments. Some of these affiliations include the Boston Red Sox, the International Olympic Committee (IOC), US Track & Field New England Association (USATF-NE), the National Collegiate Athletic Association (NCAA) and the US Track and Field and Cross Country Coaches Association (USTFCCCA). Ruben has also been featured by NBC Channel 7 News, Boston Herald, Boston Globe, NPR’s Only a Game with Bill Littlefield, UMass Lowell Alumni Magazine, the Tracksmith Meter Magazine and several other media outlets.