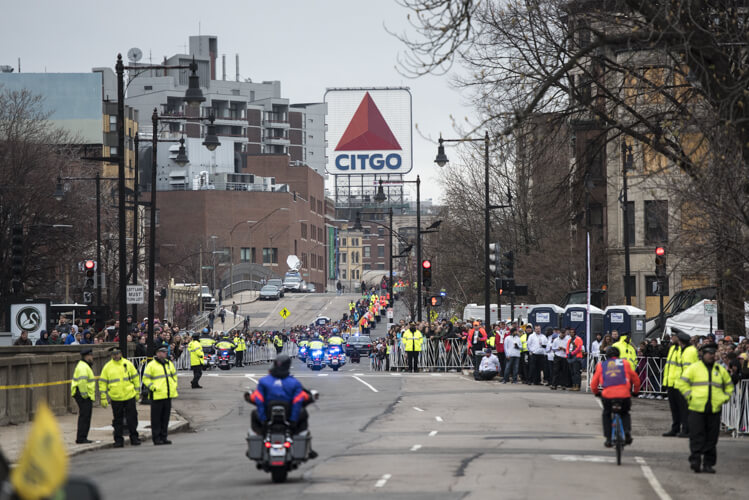 The Boston Marathon: How to Focus on the Right Things on Patriot’s Day

As my last post implied, even before the rise of social media and the Internet in general, the Boston Marathon had an extraordinarily high profile in the media and the public consciousness in general. When I was in my mid-twenties and getting ready for what would be my first of four shots at the race (so far), when I was identified as runner by inquisitive non-runners in my midst, I would typically be asked one of two questions: “How fast can you run a mile?” and “Have you run the Boston Marathon?”

Interestingly, even as the world has seen an explosion in the number of marathons, other road races, and alternative races like Spartan and Tough Mudder events in the past 20 to 25 years , Boston has retained its hammerlock on the attention span of the world’s perambulators. Clearly, the collective fixation on getting into this event by some means or another is not going away, and only appears to be intensifying. And when the always-mercurial April weather goes truly rogue and transforms the race into something out of The Day After Tomorrow, as was the case last year, it only seems to intensify people’s focus on getting into the race. (Arguably, the Boston Marathon can be termed a Veblen good.)

But you probably know all of this. Why revisit the fact that a famously famous event is famed for its fame? Because the sheer joy of having qualified for Boston, and survived the training for this year’s event, may have distracted you from key realities about the event. Some of these are general marathon issues, while others are particular to the Boston Marathon itself. Here I’ll provide a checklist of things to be aware of if you’re running Boston for the first time, especially if you’re coming from outside the Boston area.

When you think of running a marathon and getting ready for the start, what do you imagine? Think of the last race where you ran a Boston qualifying time, if this applies to you. Your mental video probably goes something like this:

You wake up and simply drive to the start, or you leave your hotel room and take a shuttle to the start a short distance away. You wait inside, if necessary, until the last possible moment, so you can stay out of the weather and be near a bathroom. You sip your drinks, shed your non-racing clothing layers, and mosey to the starting line, perhaps in a corral but just as likely not.

After you’re done, it’s almost the same process in reverse: You mosey back inside, put on some clothes, put some grub into yourself, and slowly, perhaps in a semi-pleasant daze, find your way back to your hotel or your car. It will be a few hours before the aftershocks start to hit, but the logistical side of the event are over and were never a terrible challenge to start with.

It is vital to keep in mind that Boston is nothing like this. It is run on a point-to-point course that starts in a tiny town that can barely accommodate 30,000 runners outside, let alone offer any meaningful indoor space. The weather can range from dismally cold and windy to overly warm. Even if you live in the area and can be shuttled to the start from a location other than Boston, you’ll have to sit out in the elements for a while. And keep in mind that I haven’t been at the start of this race myself since 2003, well before changes to security prompted by the 2013 bombings have made keeping a bag with you impossible.

My experiences at the start of this race have admittedly been easier than most people’s. The last three times I took part (2001, 2002 and 2003) I ran as an “elite,” or at least as an invited runner who got to sit in the Korean Church of Hopkinton, so I was away from the clamor and the weather until 10 minutes before the start, when we all filed outside to the line. At first Boston, which was 1996, I started in the first corral, but was not “elite”; still, I lucked out because one of my grad-school classmates had an uncle who was one of the Grand Poobahs of the Masonic Lodge that happens to be almost right to the church, and as a result I actually got to sleep there the night before. (Granted, I didn’t get a lot of sleep; this was the 100th running and at the time hosted the largest official marathon field in history, and the old coots were fired up and drinking all night. But on balance it was a complete score.)

Anyway, here are some must-dos or at least very strong suggestions.

On the whole, in the last 10 to 12 days before the gun goes off, you’re probably better off focusing on things besides Instagram and other audiovisual inputs about the race, because you may wind up putting too much pressure on yourself without even knowing it. And agonizing over weather reports this far out is, believe me, about the most useless and counterproductive thing you can do; I have known many Boston entrants over the years, and not one of them was better for hanging out on running forums trading anxious reports from the Weather Channel and so on.